In the late 90s researchers at the University of Washington created Busview, a Java applet that displayed Seattle bus locations on a map in real-time. It was ahead of its time and unfortunately was largely forgotten without ever seeing mainstream use. This changed in 2008 when Brian Ferris, another UW researcher, created OneBusAway. Brian used the data BusView had been silently aggregating for nearly a decade and built a simple mobile app that displays realtime arrival information for any bus stop. OneBusAway quickly became the ubiquitous Seattle transit app with over 100,000 monthly users.

Realtime arrival information is great, but I always missed the live birds-eye view of the city’s transit that BusView provided and thought it would be fun to build a modern interface ontop of it.

Inspired by similar projects from San Francisco and Portland I recently convinced my friend Andrew Filer to do exactly that, and he build Busdrone. 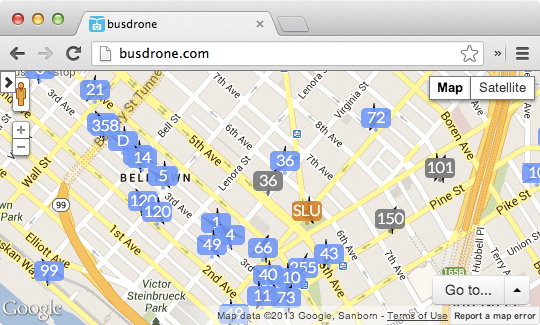 Busdrone mashes data from BusView, OneBusAway, NextBus, and WSDOT VesselWatch into a single realtime map of all the city’s public transit options. It’s a lot of fun to watch.

We also hope to eventually add private transit (car2go, Zipcar, Uber, Lyft, Sidecar) and any other location-based realtime data about the city such as 911 Fire responses and traffic collisions.

Last Saturday was the National Day of Civic Hacking, a nation-wide hackathon to build apps around public data. The Seattle event was hosted at our beautiful City Hall where I spent the day building a native Android Busdrone app while Andy continued to improve the API and web interface. 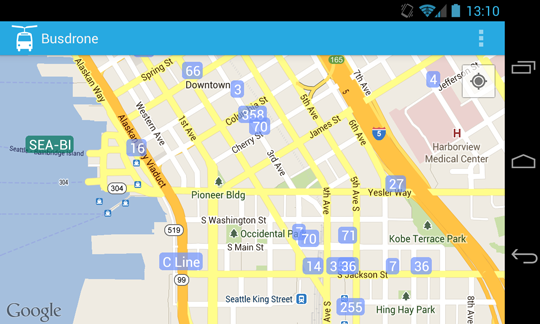 Both the Busdrone server and Android app are open source, so please grab the code and help build a platform for realtime information about cities across the world.